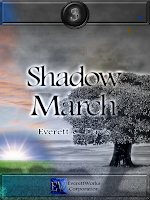 Even though Shadow March does not fulfill the complete requirements of a true march, it's a great piece that captures the shadows of our earth in music. As the sequel to Triumphant March, Shadow March is the musical opposite. Instead of the soaring triumphant melody, there is an evil, driving line, reminiscent of the fourth movement of The New World Symphony.
"I've been working quite a few *commissions lately," said Everett C. Davis, composer, "but I just haven't had any inspiration. Both marches I've written have been ways to continue to write music, and because they've been so easy to write, I didn't have to look past the classics, and John Williams for inspiration."

*Commissions of Everett C. Davis are really just composition requests, as that he does not request any money.
Compositions Music

Popular posts from this blog

By Everett - November 12, 2012
Because Alfred doesn't have any of it's publishing info online, here it is:
Thank you for giving Alfred Music Publishing the opportunity to see your work! We review every submission carefully to ensure that our publications are of the highest quality and provide the maximum educational value. Please take extra care to follow all of our guidelines before mailing your work.

Manuscript submissions not specifically requested by one of Alfred's acquisition editors are considered unsolicited and will be reviewed under the following guidelines:

Alfred will review unsolicited manuscripts in the following areas only: concert band, jazz band, marching band, school choral, orchestra, handbell, percussion methods, and music classroom. Manuscripts are to be addressed to the editorial attention of one of these areas (e.g., Attn: Concert Band Editor).

Manuscripts are to be submitted in a manner consistent with notation for the product type (e.g., band and orchestra works should …
Read more

Composition these days hasn't been easy.  I haven't had any inspiration to write anything in such a long time, and even the pieces I said I would be working on this year haven't been as easy I thought.  I've decided though to buckle down for the rest of the summer and produce an awesome piece of music which will probably be called Awesome Overture.  So far all I've worked on is the main theme.  Here's a sneak peak....