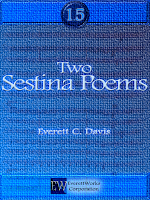 In French Poetry the Sestina is the most advanced form of poetry, and in music the Sonata is the most advanced form a movement can be written in. I thought it was fitting that a sonata was written about two sestina poems. The primary subject is about a sad and depressing poem called I Have Become the World, and the secondary subject is about a happy, joyous poem called The Power of Love. Both poems aren't famous, and can't be found publicly.


I Have Become the World

Pain
is a necessity in life.
It makes emotion more bearable
and prolongs the bitter yet comforting end.
Even more than the end itself, the world is cold.
And where it is coldest there exists only death.

Some think of it as a tragedy when death
in reality does not bring pain.
Its only purveyor is this world so cold.
I may be the first to ask why life
was spawned in a void like me, so empty waiting for the end.
Rarely does anyone long for the inevitable ultimatum, for most it is not bearable.
To only those with imprudent souls are life's pressures even fraudulently bearable.
The most relevant questions can only be answered by death,
one of which is the method and instrument of every galaxy's destruction. Answers will pour in, meanwhile evaporating the pain.
No one in this darkness can define the meaning of life;
all can be answered only once one submits to the merciless cold.
I like many feign joy for others while inside all is lost in the cold.
And it for me has become anything but bearable.
I have dragged this cross with me through life
and finally the great weight may be lifted by death.
Through life the greatest obstacle for the majority has been my greatest luxury, pain.
Time has taught me patience, but I like many or lonely grow tired of waiting for the end.
Love is the only past-time while awaiting the end.
Without it everyone would emulate the world itself, cold
and completely numbed to pain,
devoid of the greatest luxury, making nothing bearable.
So I utilize what remains of it before death
and pass the time before finding the utopian definition of life.
Life like all will slowly meet its crawling end.
And it, the object both climaxes and resolves with death.
Through it the gateway away from the cold
will be revealed, for nothing will have to be bearable
anymore. There will no longer be any use for the once greatest luxury, pain.
The pain of life,
making bearable the end,
is the only warmth in this terrible cold.
Compositions Music

Popular posts from this blog

By Everett - November 12, 2012
Because Alfred doesn't have any of it's publishing info online, here it is:
Thank you for giving Alfred Music Publishing the opportunity to see your work! We review every submission carefully to ensure that our publications are of the highest quality and provide the maximum educational value. Please take extra care to follow all of our guidelines before mailing your work.

Manuscript submissions not specifically requested by one of Alfred's acquisition editors are considered unsolicited and will be reviewed under the following guidelines:

Alfred will review unsolicited manuscripts in the following areas only: concert band, jazz band, marching band, school choral, orchestra, handbell, percussion methods, and music classroom. Manuscripts are to be addressed to the editorial attention of one of these areas (e.g., Attn: Concert Band Editor).

Manuscripts are to be submitted in a manner consistent with notation for the product type (e.g., band and orchestra works should …
Read more

Composition these days hasn't been easy.  I haven't had any inspiration to write anything in such a long time, and even the pieces I said I would be working on this year haven't been as easy I thought.  I've decided though to buckle down for the rest of the summer and produce an awesome piece of music which will probably be called Awesome Overture.  So far all I've worked on is the main theme.  Here's a sneak peak....